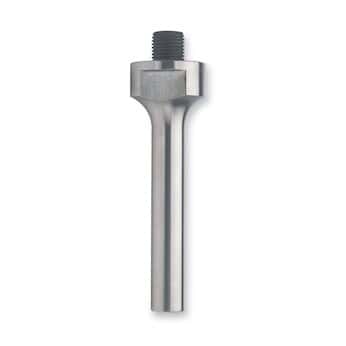 Add To Cart
+ADD TO LIST
Often Bought with...

More About this Item

Probes (sometimes referred to as horns) are one-half wavelength long tools that act as mechanical transformers to increase the amplitude of vibration generated by the converter. They consist of two sections each having different cross-sectional areas. When driven at its resonant frequency, the probe expands and contracts longitudinally about its center. However, no longitudinal motion occurs at the threaded nodal point (area of no activity), allowing accessories to be connected to the probe at that point. The greater the mass ratio between the upper section and the lower section, the greater the amplification factor. Probes with smaller tip diameters produce greater intensity of cavitation, but the energy released is restricted to a narrower, more concentrated field. Conversely, probes with larger tip diameters produce less intensity, but the energy is released over a greater area. The larger the tip diameter, the larger the volume that can be processed, but at lower intensity. High gain probes produce higher intensity than standard probes of the same diameter, and are usually recommended for processing larger volumes or difficult applications. Probes are fabricated from high grade titanium alloy Ti-6Al-4V because of its high tensile strength, good acoustical properties at ultrasonic frequencies, high resistance to corrosion, low toxicity, and excellent resistance to cavitation erosion. They are autoclavable.

Need Help with this product?